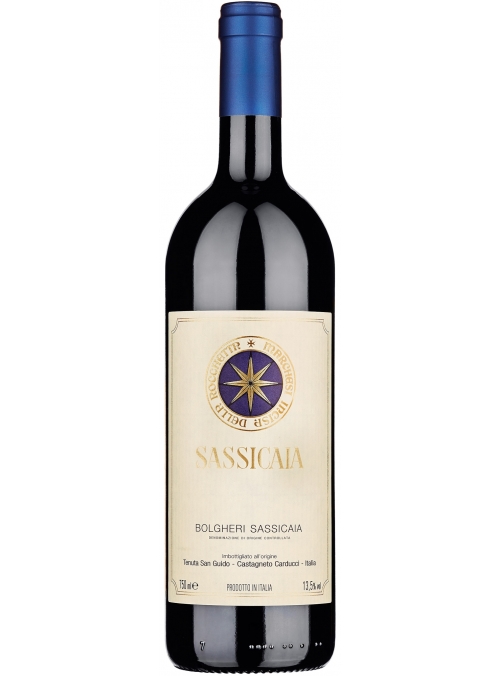 The picture is for illustrative purposes only and may not represent the actual product.

The red wine Sassicaia originates from the lands of Tuscany where the Tenuta San Guido winery is the protagonist with renowned labels. Obtained from the meticulous processing of Cabernet-Sauvignon and Cabernet Franc grapes, selected and vinified with consolidated production methods, the red wine Tenuta San Guido gives the palate an energetic and enveloping sip, excellent with red meats and mature cheeses.

Do you want to receive your bottles in a wooden box? Choose which one!

By buying this product you can collect up to 27 loyalty points. Your cart will total 27 points that can be converted into a voucher of 13,50 €.

Wine Spectator, one of the most authoritative wine magazines on an international level, has defined it as the best wine in the world, giving it a full score of one hundred points out of one hundred: the Sassicaia 2016 is one of the highest ever.

The Tuscan wine label of Tenuta San Guido had already been included in the top ten of the well-known magazine in 1991 with the 1988 vintage, which had positioned itself in the middle of the ranking, demonstrating the already extraordinary quality of a wine born almost by chance in the 1940s.

The intuition that has earned the Sassicaia Bolgheri DOC label its extraordinary success is thanks to the founder of the Tuscan winery, in which he was the first to understand the exceptional winemaking potential of the small territory in the province of Livorno.

The Bordeaux grapes Cabernet-Sauvignon and Cabernet franc have found a precious habitat in the vineyards of Tuscany. The soil and climate conditions are particularly prone to embellish the essence of the fruits, giving them an absolute oenological value.

The 2016 vintage, one of the best ever, has been transformed into the highly prized Sassicaia label after the usual careful winemaking process that involves aging its organoleptic qualities in French oak barriques for two years, before the next rest in the bottle. The Sassicaia 2016 of Tenuta San Guido offers a tasting experience that few can afford.

In the same category